Tempsford Hall is the UK headquarters of Kier Group and the project to refurbish the old hall was a collaboration between various divisions of Kier as part of their project to develop the entire site.

The design involved the initial production of a series of 3D visualisation drawings to illustrate the rolling roof concept to Kier, who were skeptical. “We have never seen anything like this before, I am not sure how it will work” was one comment from Kier Engineering Services after the initial scheme was submitted.  Once Kier gave the go-ahead, the design programme was tight and we had to work with Modus right up to the start date to ensure everything was in place. 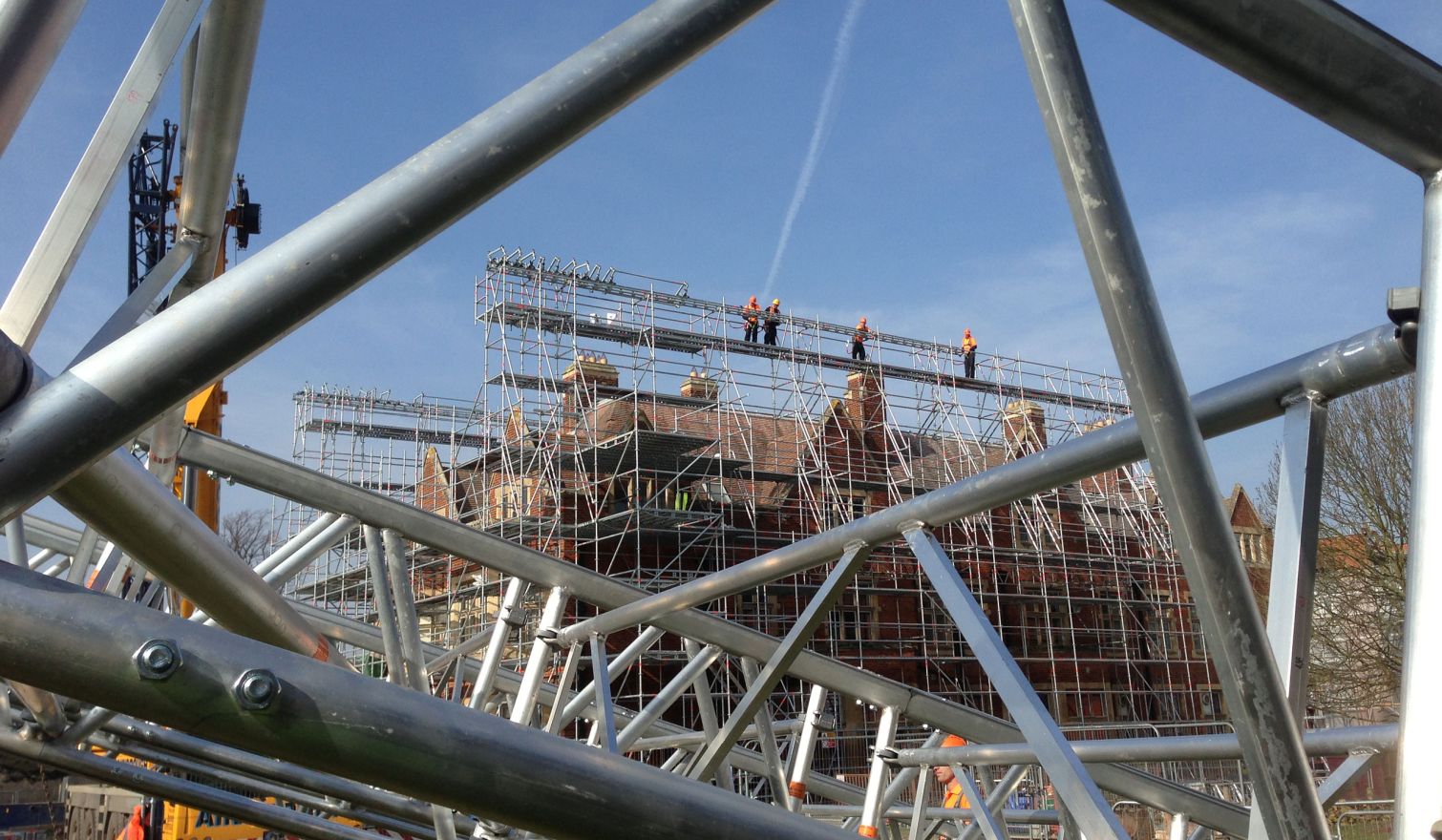 The scaffold was erected entirely from Layher Allround with a XL Keder Rolling Roof system. The solution involved erecting a full perimeter scaffold, but with the roof coverage at 55% of the building at any one time. This led to phased repair work on the roof, once one end had been completed, the roof was rolled along the scaffold to allow work on the other end to commence.

There were a series of significant design challenges to overcome. The first being the size of the bay windows along each elevation. The ground based scaffold followed the bays and recesses of the building, the utilisation by Modus of their range of adjustable deck components contributed significantly to making this work on site; the long western elevation had three adjustable bays, whilst the other three had one each. This meant that an inside gap no greater than 25mm in any location could be maintained. This then allowed 750 deep alu. bridging beams to run along each long elevation above the bay windows and form the main support for the temporary roof structure above.

We had to pay special attention to the anchors on the entire project. The poor condition of the brickwork in places and dilapidated mortar joints resulted in low tensile load capacities for individual anchors. An Apollo AST bracket was employed, with two and four bolt configurations, in specific locations to suit the integrity of the building. The bracing forming the tie mechanism was then individually designed for each location. 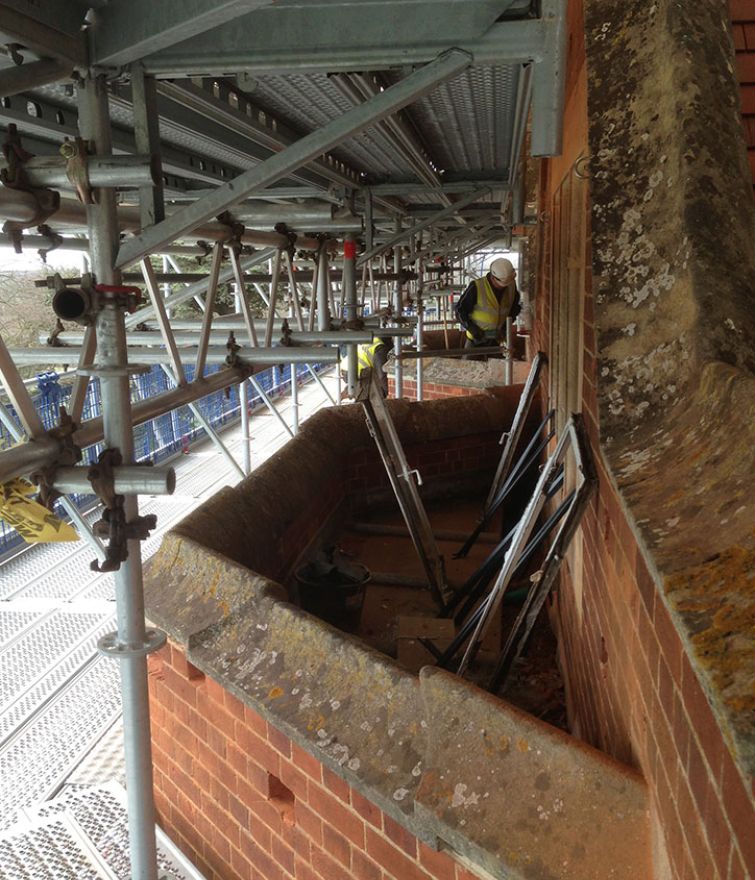 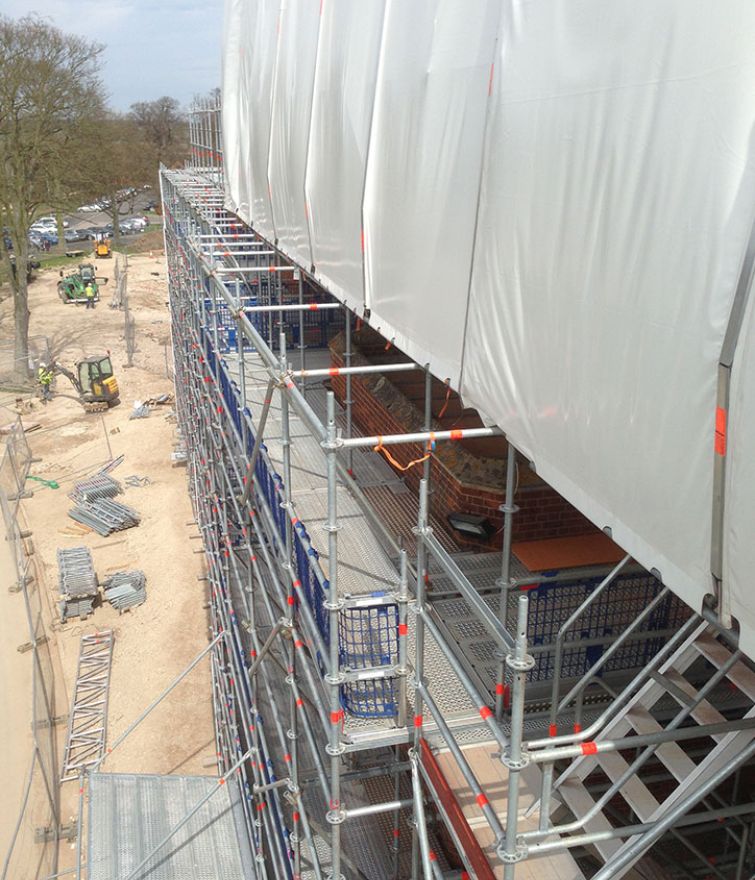 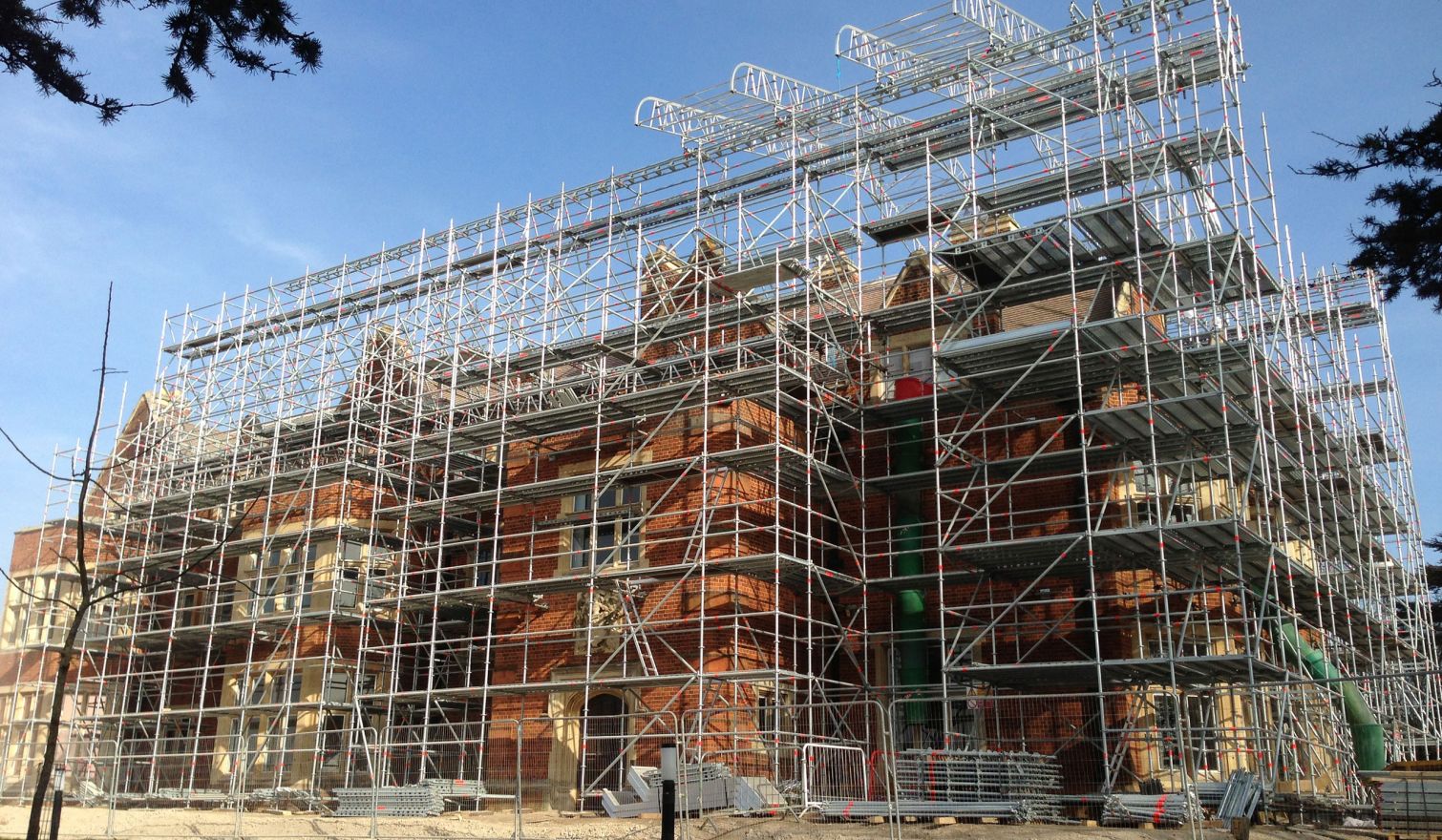 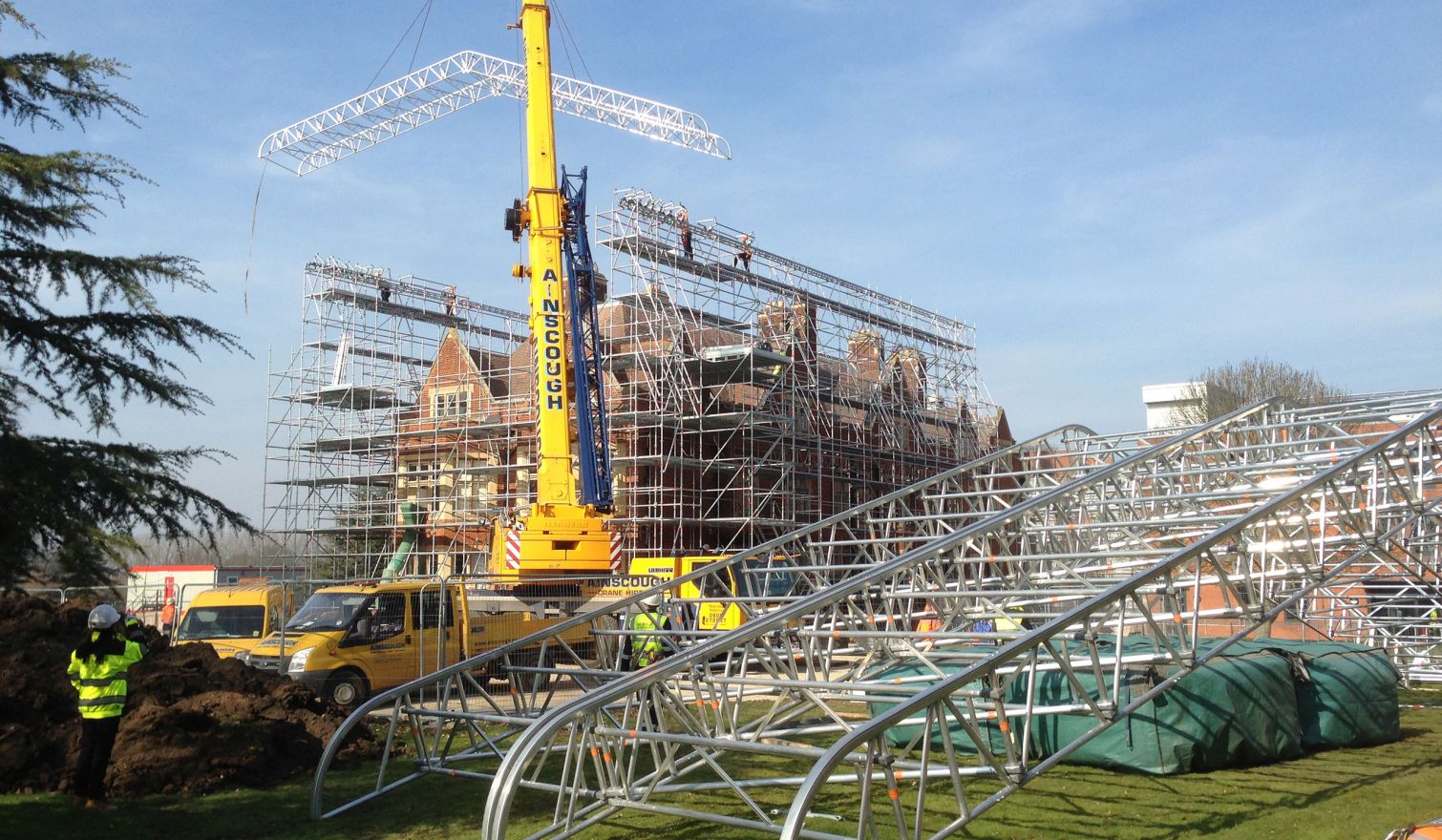 The sheeting was reasonably orthodox for the main roof trusses and end gable. We employed the lessons learnt from our project with Modus at Cranborne Lodge regarding the gable sheeting interface with the tri-beam and castor, and the sealing method for the vertical seams of the gable. The main challenge was the mid-roof gable as this had to follow the profile of the existing roof and facilitate rain water run-off into suitable (still functioning) conduits and down pipes. As luck would have it, we did not have a section through the building where the mid-roof gable fell, so a combination of linear interpolation, trigonometry and Bing Maps ‘Birdseye” view enabled us to derive the information we needed.

The location of the scaffold obviously drew close attention from Kier Management and Health & Safety team. Modus were commended for their on-site performance and the Scaffold Structure was awarded a ‘Kier Blug Flag’ on 23rd March 2013. 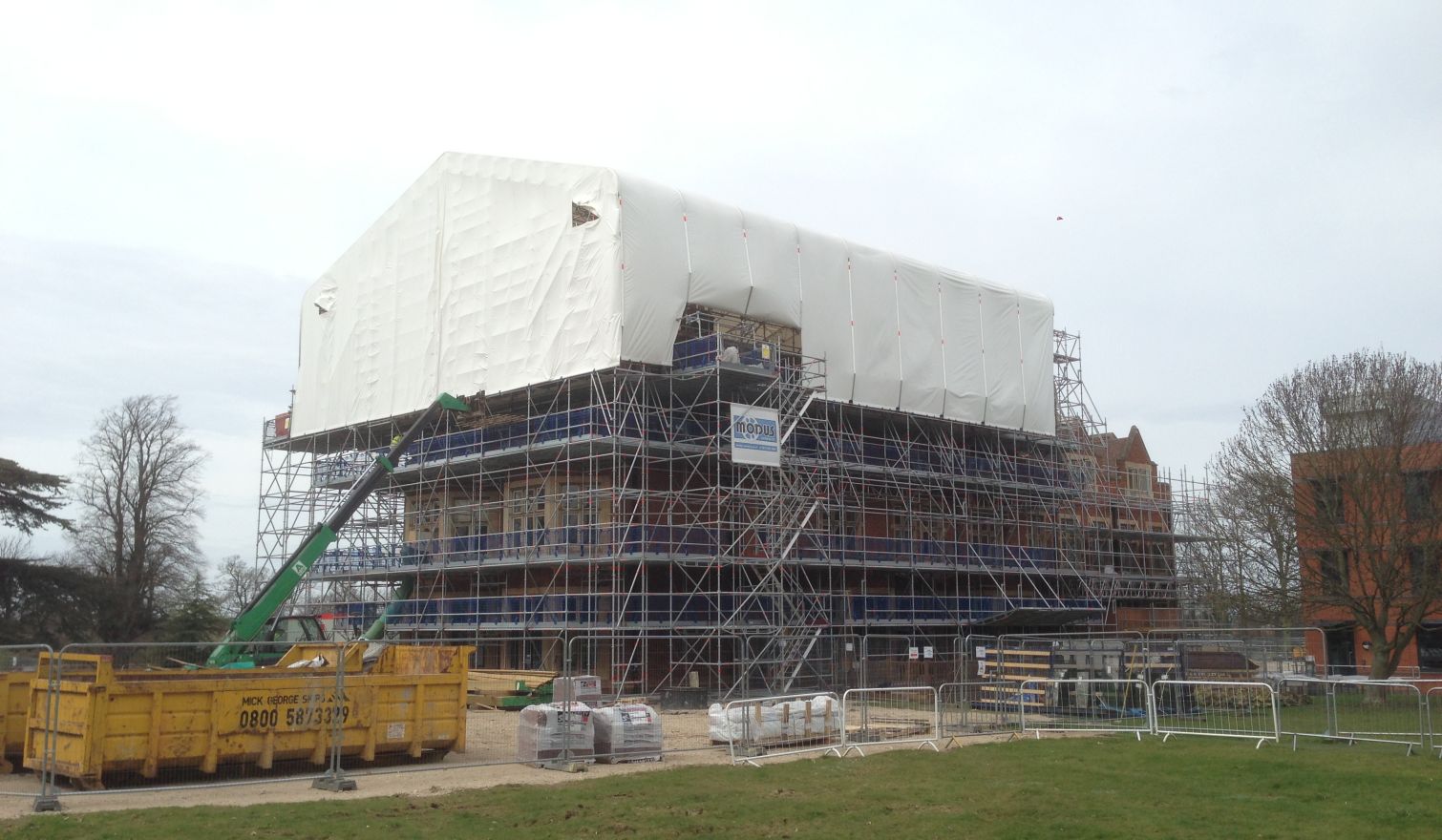